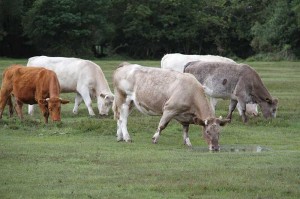 When an animal is let out onto the Forest it tends to ‘haunt’ particular areas, rather than roaming the Forest at large. If a commoner buys an animal from another part of the Forest, it will want to go back to its haunt. One old commoner’s trick was to tie a pony from the north of the Forest to one from the south, so they’d both settle down rather than pull in opposite directions!