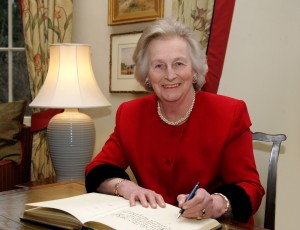 Dame Florence Mary Fagan DCVO JP was the Chancellor of the University of Winchester, and until her retirement on 11 September 2014, was the Lord Lieutenant of Hampshire.

Born at Gonalston Hall, Nottinghamshire on 11 September 1939, Dame Mary Fagan is married to Captain Christopher Fagan and they have lived for over 40 years in Hampshire.

The Lord-Lieutenant was made a Dame Commander of the Royal Victorian Order by The Queen in the Birthday Honours list announced on 13th June 2009. 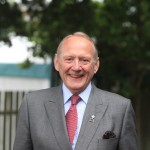 Clive Bowring was born in London in 1937. After Rugby School and National Service in the Royal Navy, during which he reached the rank of Lieutenant R.N.R., he was given the opportunity of either University or travel. He chose the latter and lived in Sydney for the following 18 months. On returning to the UK he joined the family firm of C.T.Bowring and Co. Limited based in the City of London. On its takeover in 1980 he and a cousin left to form a new insurance brokerage house which still continues to prosper.

His love of the New Forest started when he was a boy and when he and his sister were brought on holiday to the area by his parents. In 1987 they purchased a derelict cottage in Fritham and over the next few years undertook the renovation work of the cottage and its outbuildings. Nowadays they own various properties including a farm from which as Commoners they turn out animals on the Forest, and the traditional and well known Public House, the Royal Oak. 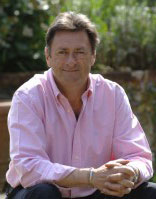 Alan Titchmarsh was born and brought up on the edge of Ilkley Moor, leaving school at fifteen to become an apprentice gardener before training at horticultural college and the Royal Botanic Gardens, Kew.  He has written four volumes of memoirs, eight novels, more than seventy gardening books (his latest, My Secret Garden, is about his own garden in Hampshire,) and contributes regularly to BBC Gardeners’ World Magazine, Country Life, The Daily Express, Sunday Express and The Sunday Telegraph.

Alan presents the BBC’s coverage of The Chelsea Flower Show, his own daytime ITV television show, his Saturday morning radio show on Classic FM and there is a third series of Love Your Garden in the pipeline.  He is a regular compere with the City of Birmingham Symphony Orchestra and the Birmingham Royal Ballet, and last year he presented Elizabeth: Queen, Wife, Mother on television to celebrate Her Majesty The Queen’s Diamond Jubilee, with an accompanying book.

The Rt. Hon. the Earl of Malmesbury DL

Lord Malmesbury is a farmer and landowner in Hampshire and Dorset and has extensive interests in rural matters, which have included chairmanships of Sparsholt College, Committee for Rural Hampshire, Fleet and District Beekeepers Association and Greywell Parish Council, where he lives. He was President of the New Forest Show in 2004 and is a member of its Policy and Management Committee. 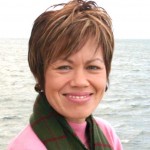 Ailsa Montagu lives in the New Forest with her husband, the Hon. Ralph Montagu, in Beaulieu, home to the National Motor Museum.

After graduating from Oxford University she worked as a linguist and translator in Brussels and London. A keen archivist and historian, she is also  Patron of the Hampshire and Isle of Wight Air Ambulance.