New Forest commoners are urging drivers to be extra careful this winter to reduce the annual spike in animal road deaths after the clocks go back.

In total, 56 animals were killed last year, one of the lowest years on record. However, the two months after the clocks change are the most dangerous of the year as the evenings become darker.

So New Forest commoners, the families who own the animals that graze the Forest, have teamed up with other organisations to take their drive safe campaign on the road this winter.

They have produced five near-life-size animal silhouettes that display the number of ponies, cattle, donkeys, pigs and sheep killed last year. The silhouettes will be placed in local towns and villages throughout winter. They provide an eye-catching reminder of the importance of driving carefully to local people, who are responsible for the majority of animal road deaths. 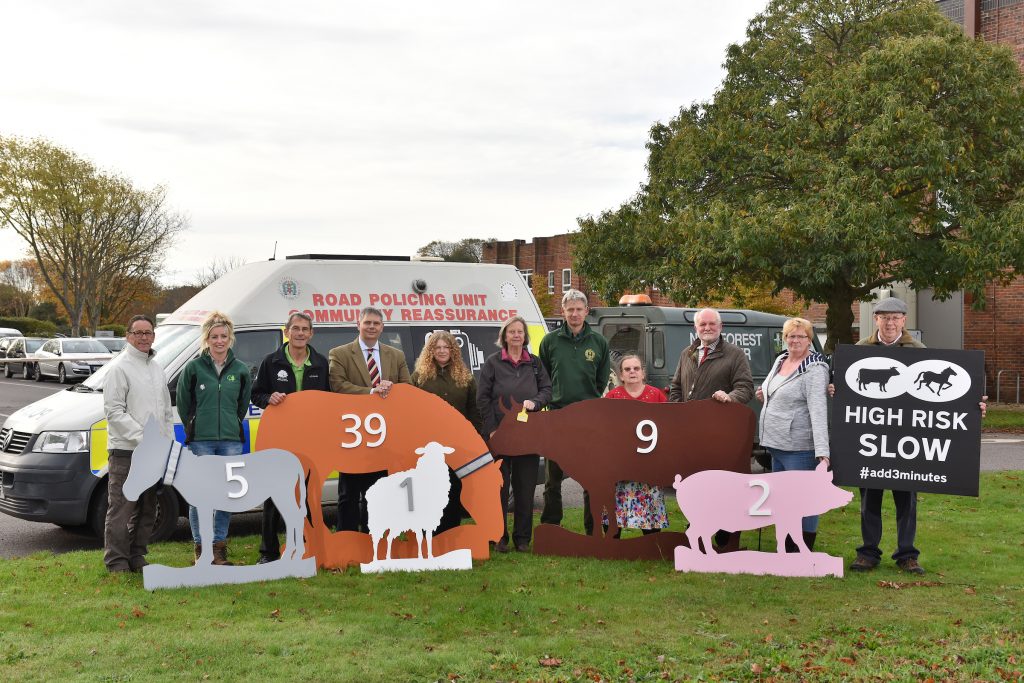 Although the total number of deaths is 40% lower than a decade ago, thanks to a range of initiatives, there is still much work to be done.

Poor driving on New Forest roads can have devastating effects. Commoner James Young, whose pony Brock Brocade was killed in a hit and run incident, said: ‘This is the most worrying time of year for every family making the effort to keep the Forest properly grazed. Pure-bred New Forest ponies like Brock Brocade are now a rare breed. Every one matters to its owners and to the Forest.

‘No pony deserves to be left all night to suffer like Brocade in an unreported hit-and-run. I really hope that people will learn to take a little more care, and save other commoners from experiencing such a pointless and awful loss.’

The silhouettes are just one part of a wider campaign that includes new temporary warning signs deployed by Hampshire County Council on key roads and the police mobile speed camera van which is out in the Forest day and night. There will also be a social media campaign urging drivers to slow down and #add3minutes to their journey.

The free-roaming animals are vital in maintaining the protected New Forest landscape — it’s their grazing which helps maintain one of the best places in Britain for nature and for people to enjoy. The ponies, donkeys, cattle, pigs and sheep are owned and cared for by commoners and every animal killed is a great loss to the Forest, and to its owner. The animals have right of way on New Forest roads.

Sue Westwood, Clerk to the Verderers, said: ‘Drivers should be aware that they are very likely to encounter animals on the Forest’s roads, day and night. Animals don’t have road sense so please help avoid accidents by driving slowly and carefully.

‘Failing to report an accident with a commoner’s animal can lead to prosecution. The Verderers offer a reward of up to £5,000, payable to anyone providing information which leads to the successful prosecution of a driver responsible for a hit and run accident.’

Nigel Matthews, of the New Forest National Park Authority, convenes the Animal Accident Reduction Group of local organisations. He said: ‘The majority of commuters are responsible, slow and careful drivers across the Forest. But it’s easy to get complacent and we know that you are three times more likely to kill or injured an animal in the Forest after the clocks go back than before.

‘So we’re taking this campaign on the road to encourage local people who use high risk routes to please #add3minutes to their journeys in the darker nights and drive slowly for New Forest animals.’

If you own or manage a prominent location in the centre of a New Forest town or village and would like to host the silhouettes for two weeks this winter please email rangers@newforestnpa.gov.uk

If you are involved in a road accident involving livestock ring the police on 999 (emergency) or 101 (non-emergency).