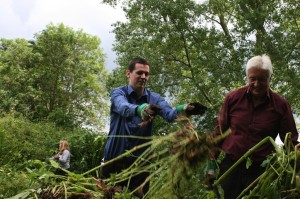 Working with the New Forest Land Advice Service, our funding helped direct conservation action to eradicate Himalayan Balsam from the River Blackwater which runs for approximately 25km in the north of the New Forest.

Himalayan Balsam is a non-native plant which easily dominates river banks, leading to a loss of native species which are unable to compete.

Its shallow roots also result in localised erosion of the river banks leading to sedimentation of gravels which affect fish spawning, decreasing the number of freshwater invertebrates.